This is what our patients say

The results of the blood test I had taken before the first visit showed that I was actually a wreck. Perhaps the most important thing was that I was told in black and white that I was not feeling well.

“When I came to my first visit to HerCare I was a wreck. In the years before that, I had sought help for sleep problems, unexplained weight gain and extreme fatigue. But, I got no help. During this time I was simultaneously diagnosed with psoriasis and migraines, the problems grew and I felt increasingly worse. I assumed there was a common denominator in that I was approaching menopause, but it was too complex an area for me to understand and draw my own conclusions on my own.

That I was actually a wreck was shown by the results of the blood test I had taken before the first visit with "my" midwife. Values ​​that should be high were low and vice versa, but perhaps most importantly, I was told in black and white that I was not feeling well.

The first meeting with my midwife was absolutely crucial for me, we went through me from head to toe, any illnesses I had over the years, stress and life situation. Connections became apparent when you saw the whole, something no one else helped me with before. At the same time, it was with the greatest respect and humility that the conversation took place.

I also visited a gynecologist and nutritional therapist. Everything is connected and it became so obvious to me on the first visit. Today it has been 8 months since my first visit and I feel so much better. I haven't felt this good in many, many years and I feel like I'm back to my normal self.

It may sound cliché, but the help I have received at HerCare has been life-changing for me. It turned a curve that only went downward not only physically but also psychologically. It is hugely draining to not feel well and ultimately it also affects one's self-esteem, self-confidence and character. Now I'm back where I want to be, and I'm absolutely not a wreck anymore.”

It was like opening a window wide and filling the lungs with fresh air. The strength of the body returned, and the mental energy was back. I have gradually returned to work.

“When I went to my first appointment at HerCare, a midwife gave me a short lesson in body chemistry. She explained how burnout occurs and is perpetuated.

To see in black and white that my body's endocrine system was not working meant a lot to me. It made it clear that it will not help either to "pull yourself together" and move on, or to just rest and wait. My ailment was concrete.

After the test results came, things happened quite quickly. A nutritional therapist at HerCare explained what had happened to my body during my long period of stress. She explained how by supporting with certain nutrients you can help the body get back on track. She also explained why a lifestyle change is the basis for healing. With this, and with a list of supplements tailored to my needs, I was given the tools to manage my life.

I started taking the supplements and after three or four weeks I felt the ship turn. I became calm, and the previously ever-present stress, worry and anxiety disappeared. It was like opening a window wide and filling the lungs with fresh air. I was able to focus easily and my thoughts were crystal clear. The strength of the body returned, and the mental energy was back.

I have gradually returned to work. My supplements give me a base strength I can rely on. The clear review of the various hormones and signaling substances has made me increasingly able to read my body. With many thanks to HerCare.”

Had a very hard time living a normal life. Got stressed by the smallest thing and never got everyday life together. Was incredibly sad all the time and felt miserable.

“Searched for fatigue, stress, PMS, depression and exhaustion. Felt very bad and didn't really know where to turn. Had probably had my problems for at least 6 years.

Had a very hard time living a normal life. Got stressed by the smallest thing and never got everyday life together. Was incredibly sad all the time and felt miserable.

I met Carina primarily, also a little Mia and a midwife and gynecologist, and she probably saved my life, I think.

Got my faith back in getting real help. It was so nice to know how serious they were and that they really understood everything. Felt welcome and trusted. Got many tools for everyday life and someone to turn to.

Today I feel much better but not completely well. Got pregnant so "interrupted" my "treatment" until further notice. However, I miss it a lot.

Never met anyone like Carina, miss her every day so much, and I am so grateful for what Mia has started. This is so important that it exists today!”

I cannot describe in words the gratitude I feel for her and what she has helped me with. An investment for life!

"I have gone to many different therapists over the years and received perfectly okay help until the day I finally met Carina Landin at HerCare and understood what results therapy can really bring. She not only asks lots of questions and nods in agreement, but dares to challenge me just enough without "the rubber band coming off".

She has the ability to sense where I am, see the big picture, capture the core of the "problem" and gently help me find new ways. It is one thing to come to an understanding, then it takes strength, courage and understanding what I need to do to move on. Carina succeeds in this.

I cannot describe in words the gratitude I feel for her and what she has helped me with. An investment for life!”

I really like HerCare's holistic approach to women's health! Now I feel more energetic, happier and aware of how I feel in my body after eating different kinds of food.

“I applied to HerCare for IBS, mood swings and depression. I felt depressed, anxious and had a bubbly stomach. This affected my life and I felt low energy and no stamina. I had suffered with the symptoms for about two years.

At HerCare, I met midwife Mia-Maria and nutritional therapist Victoria. I really like HerCare's holistic approach to women's health! Now I feel more energetic, happier and aware of how I feel in my body after eating different kinds of food. Clean Reset has given me a method to explore how my body can heal itself from inflammation. Super interesting. After bread, gluten I often get a headache - before I had no idea about it. Now I can avoid it - but also have a sandwich sometimes... I was helped to find out which diet suits me and I was given advice on nutritional supplements. Blood tests are also essential!”

I belong to those who barely manage to exist on certain days of the month. These days I just wanted to lie down and die to avoid feeling as unspeakably bad as I did when the imbalance was at its worst.

"Life as a woman shouldn't be so tough that you sometimes ask not to wake up to a new day again. These days, just something as simple as taking a shower can take the energy available at the moment. It's so easy to feel guilty and ashamed of your behavior and mood, especially when it's a rollercoaster several times a month.

For two years now, I have received hormone treatment in order to have a life that is reasonably humane. I have Mia Lundin to thank for that help. She was there for me when I was about to give up completely. I was exhausted as a human being and grasping at straws. Thankfully, Mia caught me and put in support to help the body function again. Mia is very professional and a specialist in the hormonal balance in the body, which can be absolutely decisive for whether we women can cope with our life situation or not. It may sound exaggerated but I know she saved my life right there and then, two years ago.

You woman who recognizes you, for God's sake don't give up, there is hope!

So grateful that Mia Lundin opened her reception Hercare. They save lives there, think about it! What is a woman's life worth in money? Yes, it costs to get help, because this care is not subsidized by tax funds like that at the health centers etc. The day the politicians start taking responsibility for women's health, hopefully the care at Hercare will cost less. But also remember that today a doctor barely has time to meet you before the next patient is called into the room you are in. At Hercare it is not like that, they take the time to really MEET you. You will be seen, heard and helped.”

We use cookies to ensure that we give you the best experience on our website. If you continue to use this site, we will assume you agree to this.

Now we also welcome men. Book his visit at HisCare.se 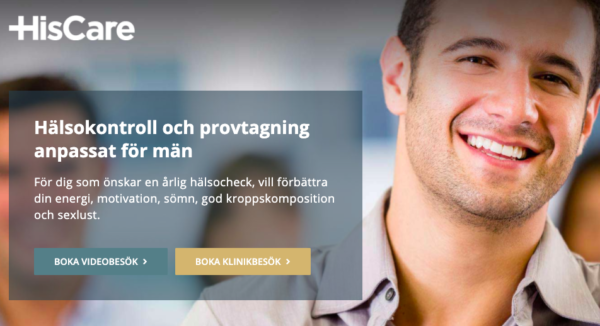